Our Book Reviews on Tales of a Sixth- Grade Muppet 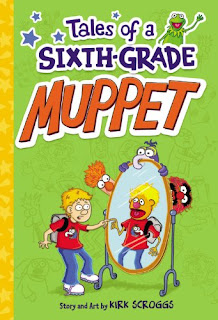 Tales of a Sixth-Grade Muppet
By Kirk Scroggs
Book Report by Emiline
Tales of a Sixth Grade Muppet was one of my favorites because I love the Muppets.  Animal is my favorite Muppet because he is crazy good on the drums.  Speaking of Animal, he wasn’t in Tales of a Sixth Grade Muppet that much.  It really bummed me out.  But the book really isn’t about me so I guess I have no room to talk because Danvers, the main character from the book, has his own favorite Muppet—The Great Gonzo. Danvers is the biggest Gonzo fan you could ever imagine.
One night, Danvers is dreaming about how great Gonzo is and then a green flash suddenly appears.  Kermit is there, so is Scooter and all the other Muppets.  When Danvers wakes up from his dream he realizes he’s an orange Muppet with mop-like hair.  He goes to a special school just for Muppets where he meets Bunson Honeydew.  Dr. Honeydew thinks he has a cure.  Will Danvers turn back into a boy?  Find out in Tales of a Sixth Grade Muppet.
I liked this book because the Muppets are my favorite TV show.  They entertain me.  They do crazy stunts and they admit The Muppet Show is a show—or if they are doing a movie, they admit it is a movie.  I don’t like people faking it and thinking they are not in a show.  The Muppets don’t do that.  They even do a theme song that says, “It’s time to meet the Muppets on the Muppet Show Tonight.”  Keyword: show.    They also don’t fake like they’re not in a book in the book.  (But I don’t really mind if people fake it in books.)
My favorite part of Tales of a Sixth Grade Muppet was when Danvers met Gonzo doing a crazy toothpaste commercial.  That really sent a funny vibe to my head.  I hope you like this book, too.
I give Tales of a Sixth-Grade Muppet 5 Monsters!

Tales of a Sixth-Grade Muppet
By Kirk Scroggs
Book Report by Marsh
One day Danvers woke up. There was a green flash.  Suddenly . . . He was a Muppet.   He went to Dr. Honeydew’s lab in Eagle Talon Academy.  He wanted to see if there was a cure.  They said they would try to do what they could to find a cure.  As he was walking down the hall he noticed a sign for an after school internship with the Muppets.  To get this internship he would have to write a 2 page essay on his favorite Muppet. For a second Danvers was stunned because he wanted to be Gonzo’s assistant  (Gonzo was his idol). He thought he could just reuse an old essay he did for class. Then he noticed that it was due 2 days ago.  He was devastated. But fortunately his evil sister, Chloe, wrote a letter to the Muppets trying to get him in, but it had a catch—she got to put up all her posters in place of his gonzo posters. Kermit sent Danvers a letter…Danvers was the new assistant to Gonzo!
Find out the rest in Tales of a Sixth-Grade Muppet.
I thought this was a great book.  It had lots of humor and action.  My favorite part was when they were driving through the pothole.  It was funny because Animal was screaming and yelling pothole repeatedly.  My favorite character was Animal because of how he always yells things when gets excited.


I give this book 5 monsters because of how humorous and funny it was.
You can find out more about this book and the Author at Kirk Scroggs website:
http://kirkscroggs.com/
To find the book check out IndieBound to see if your favorite bookstore has it or visit your school or local library.
http://www.indiebound.org/
Posted by Marsh and Emiline at 6:11 AM